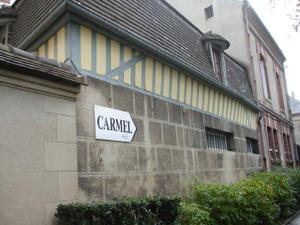 The group of Vietnameses Christians of Paris 13th of the St Hippolyte church organized a pilgrimage to Lisieux, where Saint Theresa of the Child-Jesus was canonized. When Xuân called me, I immediately answered yes, because I like much to visit this place, and Theresa is the Christian name of my daughter and my mother-in-law.

The preceding visits, I was with my husband in the car, so I did not have much freedom to follow the group. This time I travelled by the train, I discovered a means of displacement very easy and convenient, the reason is that the convent, the church, the house of Saint Theresa are very close from each other and also of the station.

My older sister Tâm, An, and me,  took  the train at 10 o clock AM , at the  Saint Lazare station and we arrived a little before midday. After having  located the places of visit, we went to take  lunch in a restaurant close to the station. Afterwards we sought the address of the Ermitage to meet our friends. They have just finished  lunch also and are  going to visit the places and attend the discussion on Saint Theresa  organized by the father Đông.

There were also faithful French at this discussion, so the father had to speak French and Vietnamese for the two communities. The words of the  father Đông were very vibrating involving us to admire  more Saint Theresa like an example in her life of a nun, her Faith and all that she did when she was still alive until her last day on earth.

After that, a guide came to take us along to visit the church Saint Jean-Pierre where a mass for our group will proceed.

We were very moved because it is in this place that Saint Theresa attended the mass in her youth, spent her days. Her place of prayer remained intact, so that today I can play the “đàn tranh” in this place, and  pray with her.

The mass was celebrated by the fathers Tâm and Linh, two young priests coming from Vietnam to study, with enthusiasm and devoted to the faithful ones.

The pilgrimage touches at its end, because the bus came to seek our friends to bring the bus,  .hem back to Paris, and our three were deposited at the station by tto take the train of  8pm14.

I was very happy in my heart because I could live one whole day with Saint Theresa, one day not too hot nor too cold of cloudy October but in me it burned vitality of faithful of God.